If you’ve been here a while, you’ll know that this author is an Ipswich Town fan. He’s regularly teased for being born in Norwich and supporting their rival team. Furthermore, being an Ipswich Town fan is tough. Right now, they’re at the bottom of the table. The very bottom. After saying goodbye to the legendary Mick McCarthy and his cheap methods of staying mid table, Marcus Evans took a gamble with League One manager Paul Hurst. To say that didn’t pay off is an understatement and it’s now up to Paul Lambert to steady the ship. To take this author’s mind off the Tractor Boys, he’s turning his attention towards the top of the Championship: more specifically, Sheffield United.

Sheffield United are currently sat on 29 points after 15 games. Second place Leeds are two points behind them and while there are plenty of games still to play, your money might look rather safe with Sheffield United. To ensure that fans don’t get too ahead of themselves, we found a 2019/20 concept away kit for The Blades.

The kit itself is black. Running vertically down the centre of the jersey are two white stripes. Furthermore, these strips of white are bordered with red. The stripes split around the club’s main sponsor – Ramsdens Currency. 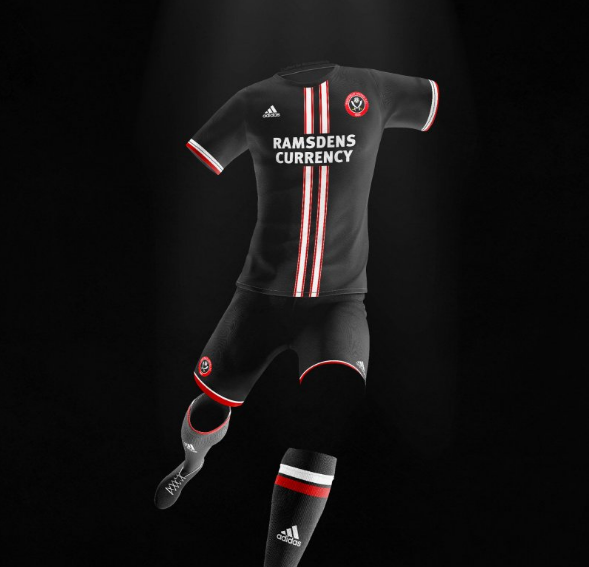 It’s undeniably a simple kit. Also simple is the neckline. There is no classic, built-up collar, and while the bottom of each sleeve is bordered by red and white, the neckline is without a bordering.

This concept kit is completed by black shorts and red socks. Each accompanying piece of clothing also features the away concept kit’s white and red stripes.

Concept kits rarely come to anything more than a design on a computer. We really like Sheffield United’s away concept kit. What do you think?