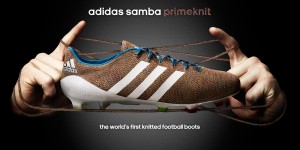 The upper of these boots is made using a knitted material formed by liquid yarns making it very soft and also quite stretchy – ultimately an extremely comfortable boot.

On top of the knitted material there is vacuum compressed layer of silicone to protect the yarns from water and dirt to keep the soft comfort of the upper.

Adidas have added a 3D texture onto the toebox and instep of the boot to offer a bit more grip, enabling better control of the ball.

The tongue of the Primeknit 2.0 is designed using soft Lycra yarns to go all the way down the side of the boot, wrapping around the midfoot area and giving you maximum lock-down onto the soleplate of the boot.

The strange looking heel of the Primeknit 2.0 does actually have some reasoning behind it; Adidas discovered if they made it more like the shape of your heel it would allow you to move your foot more naturally and with freedom whilst still providing optimum support.

The Primeknit 2.0 is being released as part of the ‘Limited Collection’ alongside the Adizero 99 gram.

10,000 pairs of boots are available worldwide. 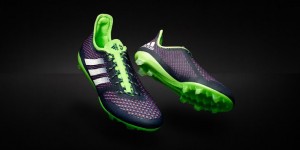