Ask any self-respecting Arsenal fan about their favourite away kit and invariably, the answer comes back yellow and blue. Not the insipid light blue Nike foisted on us in the last year of their contract, but the full navy blue which saw cups and trophies lifted by the great captains in the club’s history.

Be careful with the yellow though. Nothing but the colour of daffodils will do; don’t dare foist anything on us which even has a hint of lemon about it.

We’re not even fussed if you mess about with it. God knows the club has done that on many occasions. The 1990s saw us go from the ridiculous ‘bruised banana’ to the sublime 1993-95 kit with two diagonal navy bands. The first one is regarded endearingly, in the typically contrary fashion while the latter is remembered only when videos of Eddie McGoldrick’s outstanding goal in Liege or Ian Wright‘s against, well, frankly everyone.

Yet traditionally, the Arsenal away kit was deep navy blue, the same colour Scotland use on their home kits, white or royal blue. The first hint if yellow came in the gold shirts of the 1950 FA Cup final and 1952-53 cup run. We even had black and white stripes against Blackpool once. The now-familiar yellow and blue arrived in 1968 when the Football League decided all dark navy shirts clashed with the all-black attire of the referee and promptly banned them.

2017-18 is going to be a first though. The first time both away kits get added to the list. Which is fairly impressive considering Puma did a good job of the kits last season.

These are the leaked images of the 2017-18 Arsenal Away kits: 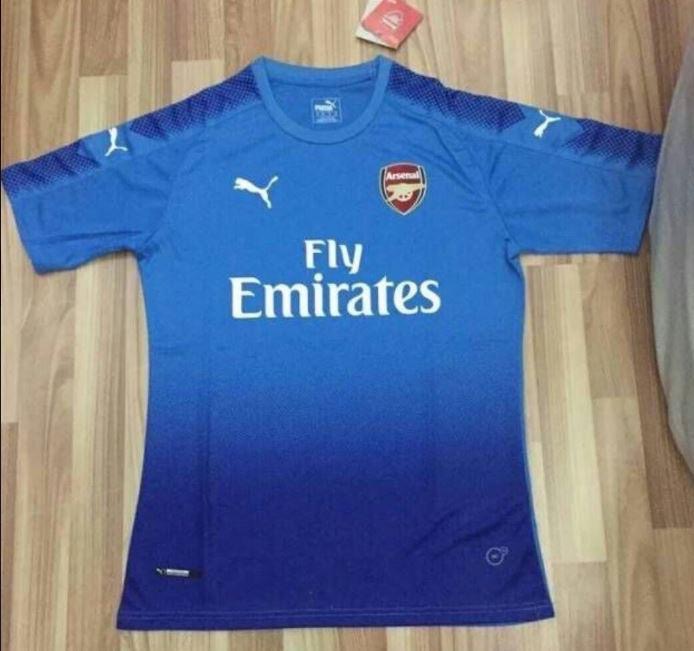 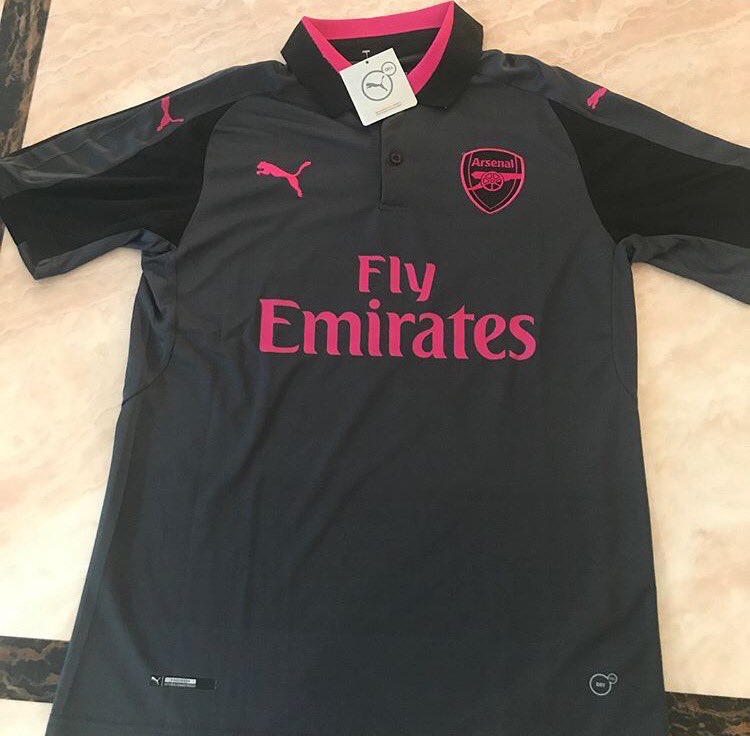 On the left, the Away shirt features light blue at the top before darkening yo royal blue at the bottom. On the sleeves, Puma’s logo is housed in a royal blue band while all other logos are white as well, save for the club badge, which is its usual red.

The third shirt is grey with black panels on the arms and collar. The remaining trim is pink while the club badge is pink on black.

Needless to say, reaction has been mixed. The blue shirt is widely disliked while the charcoal has left most indifferent at best. Which means they will sell like hot cakes!