Spanish champions, Barcelona, release their 2016/17 away strip shortly but images of the shirt have emerged online. Smarting from Real Madrid’s Champions League win, the Catalans are set for a busy summer as they seek to reinforce their position at home as well as regaining their European crown. 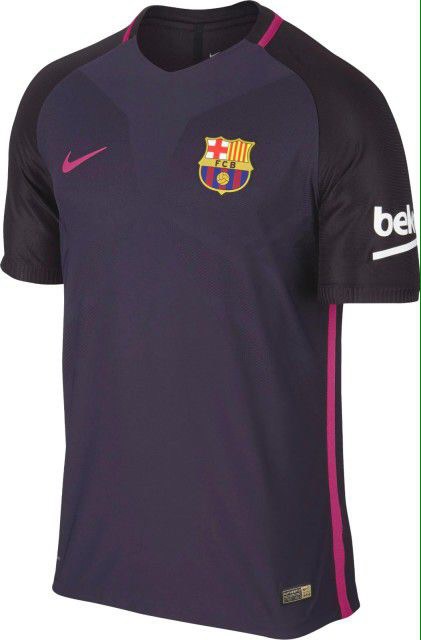 For the first time, Barcelona will wear a predominantly purple away shirt. In keeping with Nike’s current preferred template, the shoulder and sleeves are a different colour, this time black although there is some debate as to whether this is in fact a very dark navy blue. We’ll know more at the official release.

The trim of shirt is pink, with stripes down either side of the body and the Nike trademark Swoosh also in this colour. The club badge remains in its’ true colours.

The shirt has a curved v-neck collar with a pink band around the neck from each side of the collarbone. Directly below is a tonal purple y-shape leading from the shoulders to the middle of the chest.

Nike favours matching the colour of the shorts to the body of the shirt so we expect them to be purple with a pink stripe down the leg.

If the kit manufacturer holds true to form, the socks will be the vivid pink of the trim, creating a striking contrast to the rest of the kit.

Is the kit a hit or miss? Let us know in the comments.