With three games remaining, Celtic was crowned Scottish Premiership champion for the fourth time in a row, last Saturday May 2. They still not ended the celebrations and are already thinking in next season, because of the premiere of their new shirts for 2015-16.

Celtic changed the brand for the years to come, leaving Nike behind and signing a contract with New Balance. This manufacturer will dress the best team of Scotland for five years, starting next season. 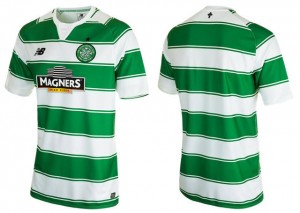 The first home jersey from New Balance to Celtic maintains the tradition but with a few modern changes. The historic green hoops over a white base has thins white and green lines above and below. The collar also has a twist, being rounded with a white triangle at the base. 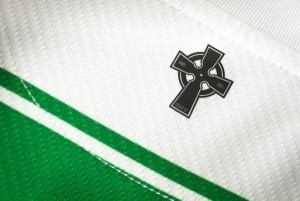 As for the details, at the inside of the neck features the phrase “A club like no other”, and on the the back under the neckline it can be seen the first club crest, a celtic cross with the numbers 1888 and 2015, founding year and the present. On the front, the sponsor logo strikes with it orange color that highligts from the rest of the shirt.