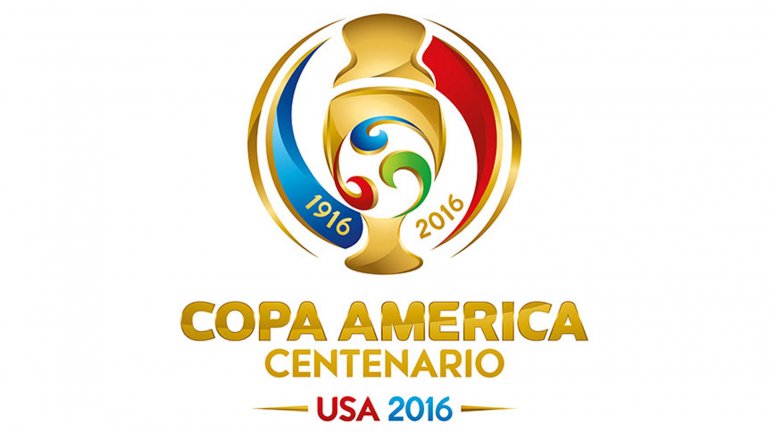 One hundred years ago, Argentina hosted the first Copa América. Chile, Brazil and Uruguay were the other competitors for a series of matches which took place in Buenos Aires and Avellaneda. As with the first World Cup in 1930, Uruguay won this tournament.

Today in celebration of the Copa América Centenario, we look at who would win this year’s tournament if it was decided by the kits alone. We kick off with the group stages. 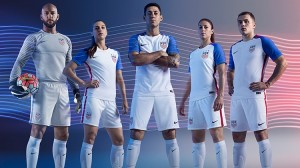 Later today, hosts United States open the competition against Colombia in Santa Clara. The other teams in the group are Paraguay and Costa Rica who meet tomorrow.

The USA suffer from the Nike design flaw which makes the kit look more like a t-shirt with the panelled sleeve and shoulders. Despite the derision heaped on England when they launched their kit of a similar design, the USSF continued unabated and frankly deserve the same criticism. 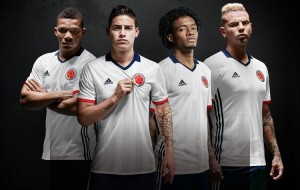 Colombia, meanwhile, went for a retro style white shirt for their home kit. It’s a classic football kit which wouldn’t have looked out of place in Argentina ’78 and España ’82. The USA and others in the group can’t hold a candle to it.

The second strip takes a more modern twist. Blue with a broad yellow chest band above a thinner red one. Adidas put their trim in yellow as well to create a sparkling away jersey.

The clear winners of this group. 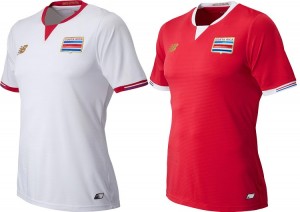 Which leaves Costa Rica and Paraguay fighting it out for the remaining place.

Los Ticos have a straightforward white shirt with red trim. It’s a traditional kit with a little twist in the full v-shape neckline but with a red reverse shirt that mirrors the home kit, it’s a bit uninspiring.

Even so, it’s a hard man who can appreciate the footballing heritage of this kit design which makes the decision tougher than it really ought to be. 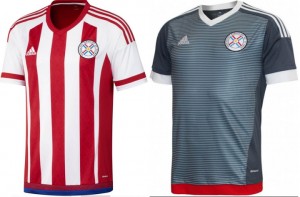 Paraguay though take the runners-up spot and a place in the quarter-finals. The red and white stripes with full red back is updated with a blue band at the bottom hemline. White sleeves offer variety, reminiscent of the Atletico Madrid kit.

The away strip swung it for me with it’s update on the Arsenal ‘bluebottle’ away kit of 1982/83. Green body with blue sleeves and back, it’s a great kit to wear as second choice. 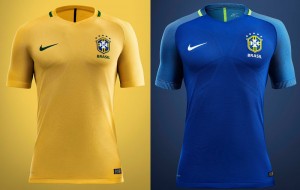 They might be favourites on the pitch but Brazil won’t have this group all their own way. The yellow shirt with light blue shorts and white socks is one of football’s iconic kits. When you think about it, Mexico ’70 springs immediately to mind with Spain twelve years later not far behind. 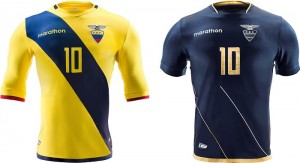 No such monstrous thoughts for Ecuador. Kit manufacturer Marathon Sports have come up with two classic tops for this summer’s tournament.

The home shirt with it’s broad diagonal dark navy sash on yellow background is a stunning look, completed with a blue waistline. The away top of dark navy with it’s white lines creating a faux sash  and gold trim is equally brilliant. They’ve romped home with maximum points. 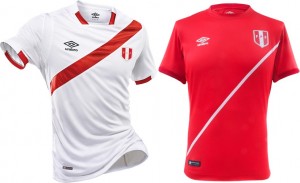 Peru’s kits play on history but give them a modern twist. The traditional white shirt with red sash is still there but this time, the sash doesn’t travel from top to bottom but instead under the arm. It costs them a goal or two along the way and that could be decisive in a tight group.

For the reverse which probably won’t get used in the group stage, they’ve opted for a thinner white and blue sash. It travels most of the shirt’s body but starts midway down the shoulder and ends higher than the bottom hemline. 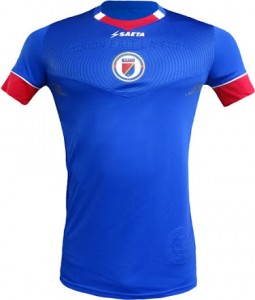 Brazil are in trouble.

Haiti are next up with a straightforward blue shirt. The trim though is it’s saving grace; broad red cuffs with a thin white band above. Completed with red neckline, book-ended by white squares, the shirt is not so boring as it originally sounded.

The reality is that it’s not enough to knock the Brazilians out of the competition. Haiti, for all the exuberant promise, don’t have enough to cope with the rest of the world’s favourite South American footballing nation.

A close escape for Brazil as they progress to the last eight on goal difference over Peru. 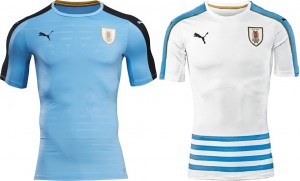 Their second choice strip seems unlikely to be used which is a pity. The white top seems straightforward enough with its blue shoulder stripes but then the designers threw a curveball with four light blue bands at the bottom.

Worth an extra goal or two which may be important in the final reckoning. 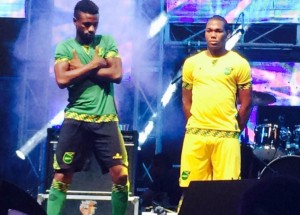 Jamaica haven’t updated their kits from the last Copa America but it’s still a colourful kit to wear. The first choice is green shirts with yellow diagonal stripped band at the bottom hemline matches the collar and cuff trim. Finished off with blue shorts, it’s a bright look.

The all-yellow away kit is bright. Broken only by the same hemline on the shirt as the first strip, there’s no danger of not being seen on the pitch in this number.

Presumably it comes with sunglasses for the crowd. 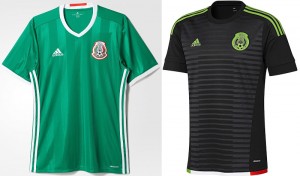 Either they or Mexico will have to change strips when the two meet. The Mexicans home kit is a traditional template from Adidas, with the Three Stripes in white down the side of the body. It’s a safe design, unadventurous really.

They are saved with the black away kit which looks stylish thanks to the lack of other colours. Adidas have put their Three Stripes across the shoulder and in gold colour scheme, an understated way to finish the kit and one which keeps them in the hunt for the places. 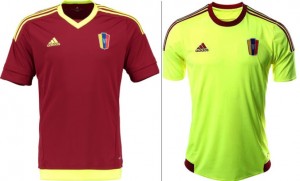 Completing the quartet is Venezuela. La Vinotinto deserve a mention not just for the stylish burgundy and yellow shirt but also the fact that they take an alcoholic drink for their nickname.

We ought to be lifting a glass to their kit designers because these are stunning in their simplicity. The burgundy contrasts with the bright yellow trim and waistline on the home shirt whilst the yellow away shirt is in the style of the Adidas Originals series; a real retro shirt that takes them to the top of this group. 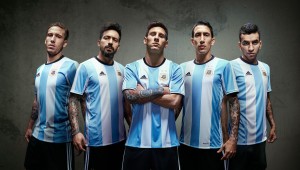 The final group sees tournament favourites Argentina take on all-comers. The blue and white stripes of their first kit is one of international football’s most immediately recognisable.

Completed with a simple black trim and shorts, it harks back to the days of Maradona and Italia ’90 when they bored everyone to tears with their performance in Rome in the final. This time, the world will hope to see more flourish and pizzazz, living up to the nation’s football heritage. 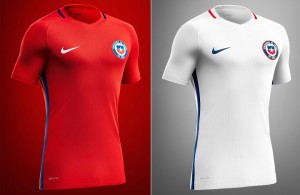 Chile won’t let their title slip easily and have tinkered around the edges of their traditional home strip of red shirts and blue shorts. Nike have put a red v-neck collar replacing the white-winged effort last time out. A touch of blue comes on the outer collar and blue side panels add a splash of colour.

The all-white away kit is a safe choice, with the same blue side panels intruding on the body of the shirt with a red outer collar. It blunts the attack and could cost them a vital goal or two at the end of the group stage. 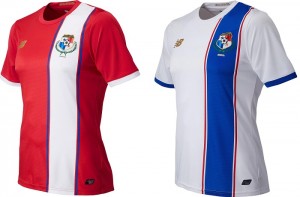 Blindsiding everyone are Panama. The central American nation may only be small but they’ve stolen a march on their bigger rivals with this summer’s kit designs.

Home and away, they’ve gone for a broad vertical stripe on the right hand side of the shirt. The first choice finds a white stripe, bordered on either side by blue, contrasting strongly with the red shirt.

When they change, the blue is striking compared to the otherwise white shirt. It’s shot them to the top of the group with a 100% record. 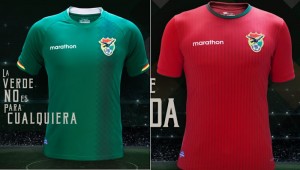 Bolivia offer a clean design of their green and white home kits. The shirts are simple in design but there’s something reassuring in that.

For their change strip, the Bolivians have opted for a Portuguese style shirt of red with green trim. Marathon Sports have taken a safe path through the design phase and left La Verde hoping to sneak through on goal difference.

All of which leaves the draw for the last eight:

We’ll be back next week with the quarter-finals. Disagree with the placings? Let us know in the comments.