The shirt designed by Nike respects the traditional pattern of the franchise, with gold and red horizontal stripes at the front and the back, and a predominance of yellow in the sides. In the center of the chest, these stripes are cut to feature the ligature logo of the team. The home kit completes with black shorts and socks, evoking the classic Strikers design. 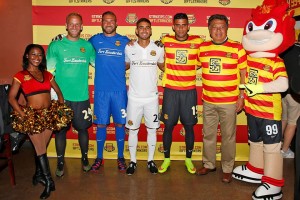 The away kit is fully white with a shirt tha has polo collar instead of a rounded one, and in the center it reads Fort Lauderdale across the chest, the name of the city which houses the team.