The 2016-17 season is almost upon us and the new Liverpool kits have been leaked by New Balance ahead of their launch on 9th May.

The leaked kit boasts Liverpool’s iconic all red design, this year with a touch of gold. 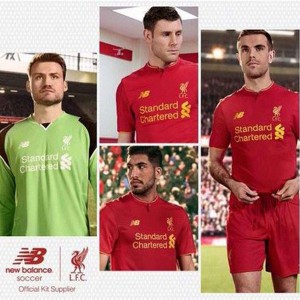 In what looks to be leaked New Balance promotional material, we can see the new home shirt of the Anfield based side has sharp, yellow lettering – as opposed to white this season – and a very similar inner golden strip at the neck and sleeve line as we’ve seen for the past eight months or so.

The main difference for the coming kit is the collar, donning a minimalistic, one button style not dissimilar to that of bitter rivals Manchester United’s home kit last season.

The goalkeeper kit, however, has reverted back to green, a colour worn by Spaniard Pepe Reina during his time at the club, including in the infamous 2006 FA Cup final which saw the Reds lift the trophy after an astounding comeback against West Ham United.

Though it would be very hard to get the design of an all red kit wrong, New Balance are doing all the right things to earn a good reputation with the Liverpool fans who were disappointed a number of years ago to see the club lose their association with merchandise giants Adidas. It certainly seems better than the 2015-2016 home kit.

What are your thoughts on the possible new 2016/17 Liverpool home strip?

Ireland Shirt History – Every ROI Kit Worn in Major Tournaments
LEAKED: Is This The New Liverpool 2016/17 Away Kit?
To Top