Photos of Liverpool‘s 2016/17 away kit have surfaced on the web at the same time interest in Napoli’s Gonzalo Higuain heightens. Jurgen Klopp is rumoured to have sanctioned a bid for the Argentine striker which would no doubt cause a surge in shirt sales if the signing happened.

This is the photo of the 2016/17 Liverpool away kit from @FumlerRawk. 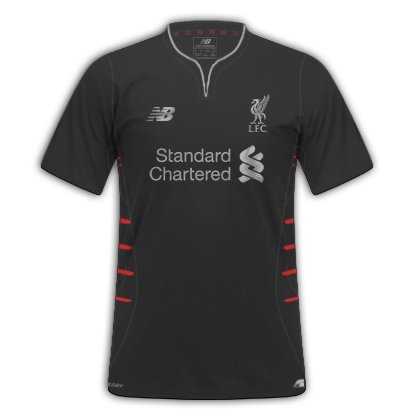 It’s been four seasons since Liverpool’s first-choice away kit has been black but this shirt design carries more of a nod toward the kit worn in 2009/10 than anything since.

The all-black shirt has a minimal trim with New Balance offering a mix of silver and red to add colour to the design.

The red stripes on the side of the body of the shirt are believed to be part of a mesh-style side panel which allows extra ‘breathability’ for the players.

A plunging neckline accentuated by the silver collar trim, adds a classical look to the shirt with no visible cuff on this design. The black background gives the silver a duller sheen, stopping the shirt acquiring an almost garish quality.

Reactions to the design have been largely positive from supporters which bodes well for the retail sales of the shirts.