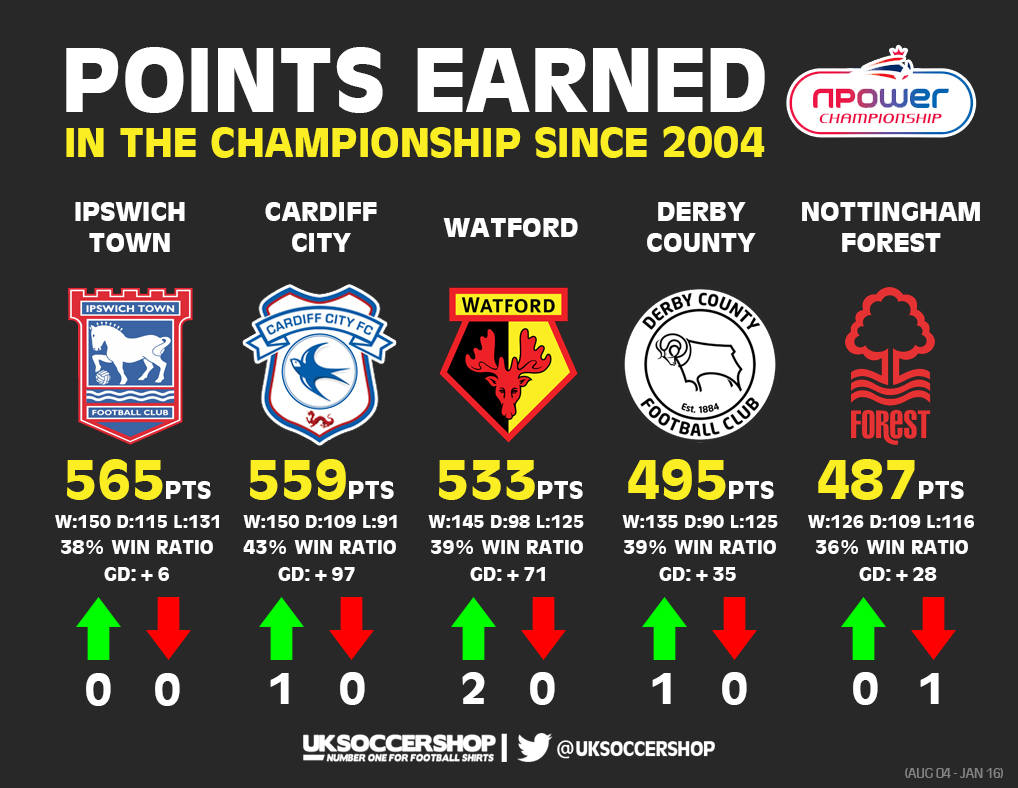 Since its inception in 2004, the Championship has proved a great platform for many teams to catapult themselves into the riches of the Premier League. However, there have been Championship mainstays who’ve propelled themselves into Football League folklore with their staying power.

Often described as the hardest league to get out of, the Championship can be as exciting as any league in the world when it comes to the business end of a season.

The Championship has had many clubs pass through its ranks since the league’s inception in 2004 but we take a look at the teams who’ve stuck around and earned themselves a place in the all time points leaderboard.

Forest are the 5th most successful club in Championship history, amassing 487 Championship points in 351 games. They have had two spells in the Championship but have never been promoted to the Premiership. In the 04/05 season, Forest were relegated from the league and didn’t make a return to the 07/08 season. Since then the City Ground club have got comfy in the Championship. Their highest finish came in the 10/11 season when they finished 3rd in one of the playoff spots, they lost their semi-final 6-4 on aggregate to eventual winners Blackpool. With an average of 1.39 points per match, it’s easy to see why they have maintained their Championship status without ever being able to gain automatic promotion.

With a better win rate than Nottingham Forrest, it’s Derby County who take the 4th spot in the all-time Championship table. Playing 351 games in the division, they’re points total stands at 495. Derby has spent 11 out of the 12 Championship seasons in the division. They gained promotion to the Premiership in the 06/07 season but were sent straight back down to the Championship the following year. The Rams highest finish came in the season they were promoted, finishing third to seal a playoff spot they would go on to win. They’ve now spent 8 consecutive years in the Championship.

The Hornets have participated in 10 out of the 12 Championship seasons. They’ve been promoted to the Premier League on 2 occasions – Through the playoffs in 05/06 and more recently last season they gained automatic promotion. They’re the only club in the all-time points table who are not currently in the league. The Vicarage Road side are sitting mid-table in England’s top flight and will be in no hurry to add to their points tally in the Championship. Before their promotion, they amassed 574 Championship goals conceding a whopping 503 with a points average of 1.45 per game.

In at number 2 is none other than Cardiff. The Cardiff City Stadium has witnessed 11 out of the last 12 seasons in the Championship, getting to the Premier League just once in that time. Famously known as the ‘nearly’ men, The Bluebirds have become synonymous with the Championship since its inception. In the 12/13 season, they finally mastered the league and were promoted to the big time. Their stay in the top flight was short-lived and they found themselves back in familiar surroundings the following season. In their time in the Championship, the team have scored 574 times and conceded 406. With an average of 1.6 points per game, they will certainly need to up their efforts in a bid to get back to the riches of the Premier League.

Ipswich Town holds the coveted or not so coveted number 1 spot as the Championships all-time points leaders. Playing in all 12 of the Championship seasons they have never been relegated or promoted. The Tractor Boys have made the playoffs twice in that time but never managed to take that final step. Ipswich have seen many teams come and go over the last 12 years but their residency as the Championships longest serving side puts them at the top of this list. With a GD of just 6, their defensive frailties may be behind their lack of Premier League prestige. The Portman Road side currently sit 8th in the table and have a lot to do if they want to realise the dream this season.