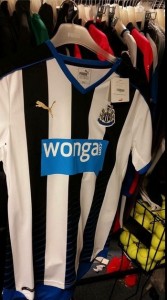 Recent images have surfaced online with what appears to be the new home shirt of Newcastle United for the 2015/16 season. Designed by German manufacturer Puma who have design privileges until what is currently 2020.

As ever the shirt, seen above, has the classic black and white stripes that we all associate with the Magpies. What can be seen is a variant of Pumas current “Pitch” template being used for many of their current designs. The black sections of the kit have a faded electric blue diagonal line pattern towards the hem of the shirt, a design element which adds a subtle accent to the typically solid stripes.

The Toons current crest that has been ever present since the 1988-99  season. Proudly situated on the left breast with the Puma insignia in gold on the right. In keeping with recent traditions a blue trim features. This time it is incorporated into the sleeve cuffs and around the v-neck collar. There is also a thin pinstripe of blue, bordering the singular black sleeve stripes similar to that seen in the 13/14 adaptation. Current sponsor, money lending firm “Wonga”, sits front and centre. Impossible to miss really with their logo.

A safe approach by Puma considering the preceding versions of the famous black and white kit which have caused some debate between fans on their approach to their beloved clubs heritage with. Usually putting their own stamp on well known tradition they return to the classic with their latest edition, adding some modern twists that give the design its own unique fingerprint in the history books when it comes to NUFCs home kit seen throughout the years.

A return to what the fans at St James’ Park know and love about Newcastle United.