The next generation of Puma‘s evoPOWER boots has ‘leaked’ onto the web. At the moment, it’s called “Vigor” although it might add a ‘u’ for the English market. Olivier Giroud is pictured below wearing the boots.

These are the evoPOWER Vigor boots, to be released in 2017.

Puma’s colourway is tentatively called ‘Gecko Green’. Whether that is still the case next year remains to be seen.

The soleplate has a tonal ligher pattern alongside translucent and black studs. A logo, in black, will along the centre.

The upper features a ‘slip-on’ construction, with GripTex technology ensuring better ball control no matter the conditions. Accufoam 3D pads improve accuracy of passing and distribution of the ball. Enhanced flexibility of movement comes from the one piece, stretchable design of the upper. 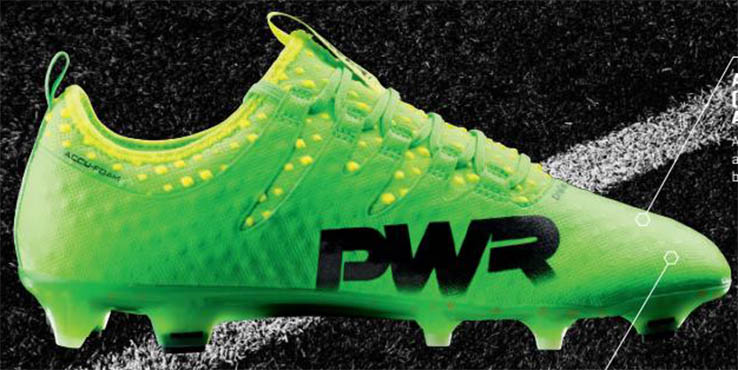 New design features include a tongueless construction with black accents and insignia. On the inner, a freshly designed evoPOWER logo – ‘PWR’ – features in strong black colouring. On the outer, the Puma Formstripe is similarly coloured.

It’s a strong and striking colourway for Puma to launch the new boot with. Although these images have yet to be confirmed as the final version of the first generation ‘Vigor’ boot, it’s one which can’t be ignored.