Luis Suárez has been spotted training with the unreleased Adidas X 15+ Skeleton Boots which are currently scheduled to be revealed later this month or early next.
The Barcelona ace becomes the second high-profile player to use these after Thomas Muller was seen sporting a pair of the unreleased Adidas boots recently during a training session. 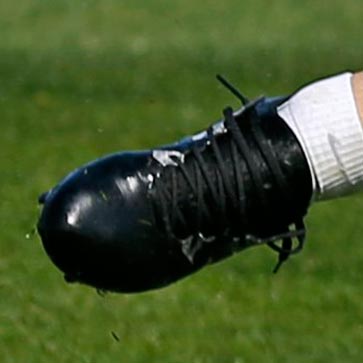 The boots Suárez wore in practice was almost entirely blacked out and were only identified as the X 15+ Skeleton Boots due to the shiny X-Cage structure.

These boots could make their debut in the Champions League quarter-finals in April with Suarez and Muller leading the charge.

By using a microfibre upper, Adidas have managed to reduce the weight of the boot, and the longer sock liner has been modified from the original Adidas X.

Adidas will release these boots with bold ‘White/Semi Solar Slime/Shock Blue’ colourway. So far it seems that this will be the very last version of X 15’s.

It’s expected that the X16 series will be coming our way as early as May this year.

Are you keen to get your hands on a pair of these well-designed boots?