How does a football kit become remembered as the ‘best’ in a club’s history? Memories of great matches, finals and significant moments that make a football club what it is. Arsenal’s home strip hasn’t always been red shirts with white sleeves but since that design was settled on in the 1930’s, it has become the only one acceptable to fans.

Here are the top ten Arsenal shirts with thanks to Arsenal Matchworn Shirts for most of the photos.

Until March 1933, Arsenal had for the most part, used red shirts as their home strip. Inspired by the tale of an outfit worn by his friend Tom Webster during a round of golf. Then-Chelsea chairman, Claude Kirkby was one of the party that day and briefly toyed with the idea of a blue shirt with white sleeves. Chapman acted on a sketch of the design during March 1933 with the first white-sleeved shirt worn for 1933-34 season. 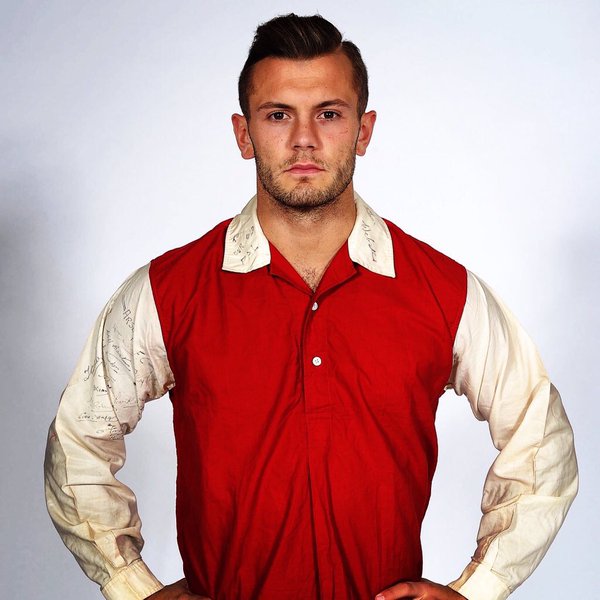 A brief interruption in the flow of yellow away shirts, this green and blue top mimicked the home shirt design. At a time when Arsenal were in a rut playing mediocre football, the shirt with its blue sleeves was a breath of fresh air. It only lasted one season though, the supporters preferring a return to yellow and blue. Recently, it’s gained popularity with the demand for retro shirts. 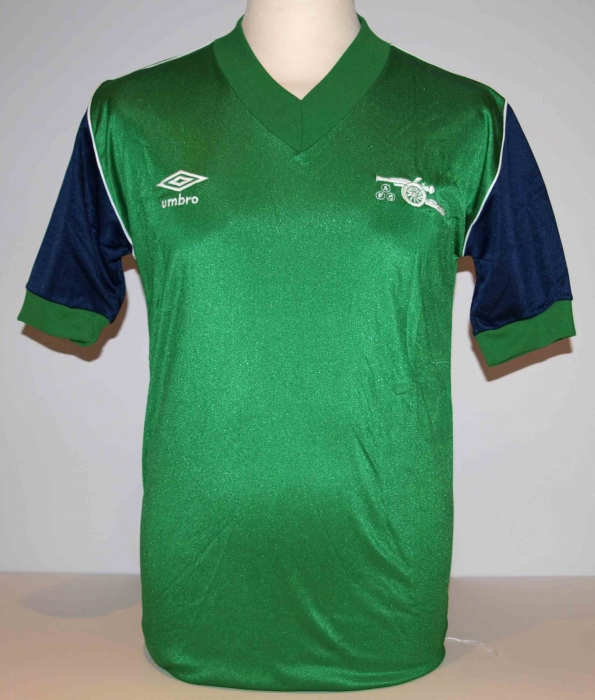 A case of so near, so far. With just over ten minutes to go, Arsenal led Barcelona by Sol Campbell’s thunderous first half header despite Jens Lehmann’s red card. Against all odds, they had one hand on the biggest prize of all.

Fate in the shape of Henrik Larsson intervened, inspiring the Catalans to score twice and snatch victory at the death. Arsenal were left ruing a string of Thierry Henry misses from chances he scored for fun in the Premier League. 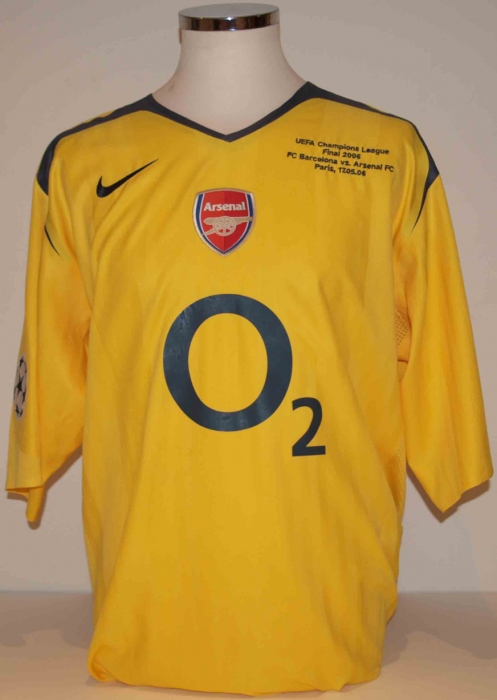 7. Are You Scotland In Disguise?

Arsenal’s change kit from 1966 to November 1968 was a commonly used combination of blue shirts with white trim, white shorts and navy blue socks. Then, at the behest of the television companies, issued an edict that navy blue away kits were banned as they clashed with the referees black shirts on the small screen. In those days, most television sets still had black-and-white screens.

After that Arsenal moved to what has become their traditional yellow away shirts with blue shorts. 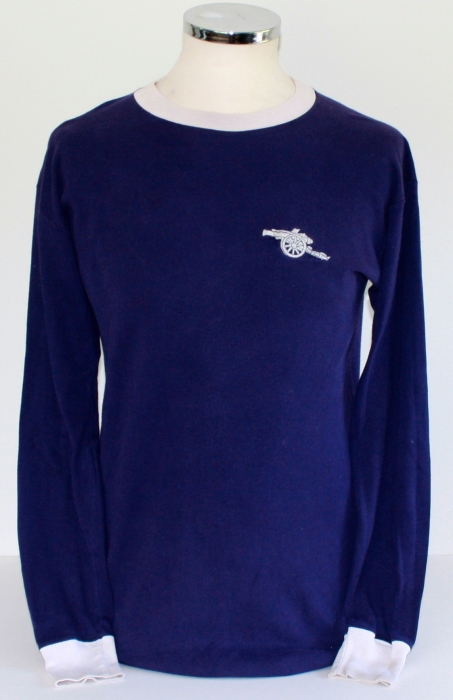 May 1979 and Arsenal were cruising to victory over Manchester United. Goals from Talbot and Stapleton put them in command before McQueen and McIlroy levelled and so began a frantic five minutes. Glory beckoned as Brady skipped down the left and fed Rix whose cross eluded Bailey and Alan Sunderland applied the finishing touch. Cue pandemonium. Forever remembered as a Wembley classic, it became known as the ‘Five-minute final’. 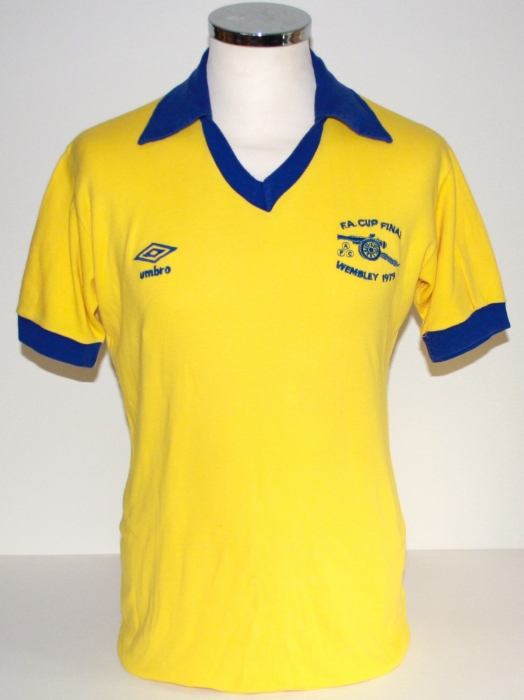 5. Reg Lewis At The Double

Before World War 2, Arsenal had been regular visitors to Wembley but since professional football resumed, they hadn’t reached an FA Cup final. That changed in 1950 when they arrived at the grand old stadium to take on Liverpool in the final.

With both clubs wearing red home strips, Arsenal lost the toss and had to wear their away strip. Up until that point, it had mostly been white shirts with black shorts but for the final, Arsenal wore gold tops with white shorts. A dry-run took place on 15th April 1950 when Newcastle visited Highbury and Arsenal wore the gold shirts.

Arsenal won 4 – 2 that day and wore the same kit in the final, beating Liverpool 2 – 0 with two Reg Lewis goals. 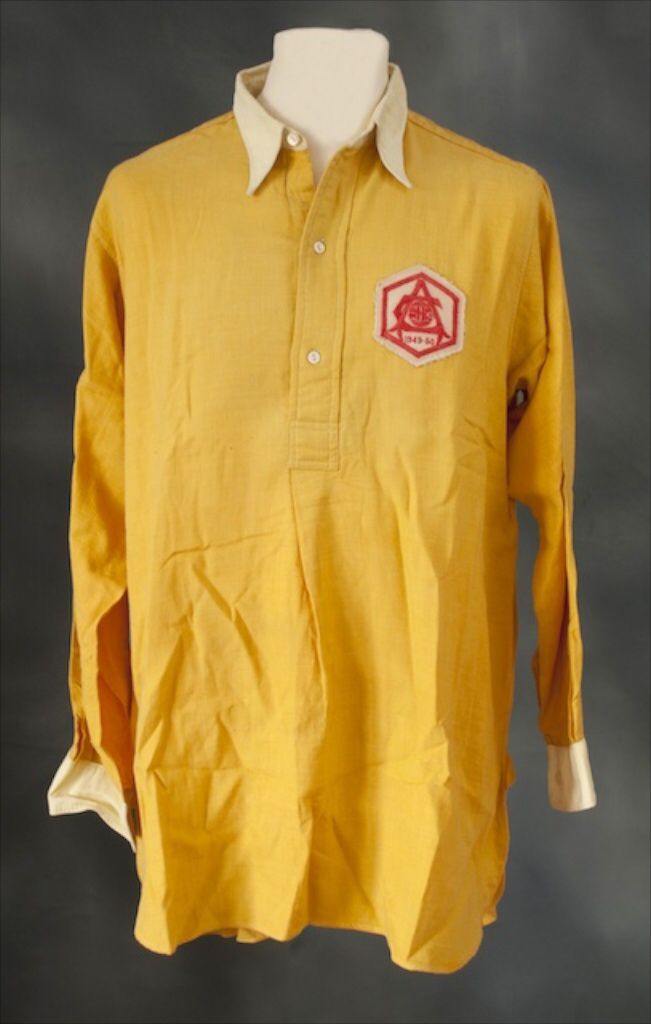 The redcurrant home strip was an homage to the first kit worn in September 1913 when Highbury opened its doors as Arsenal’s new home. The Invincibles had departed and Arsenal struggled to stay in the top four during the 2005/06 season and were only saved when Tottenham ate a dodgy lasagna at their team hotel. They lost at West Ham and Arsenal beat Wigan on the final day to finish fourth. The saving grace was the Champions League and Arsenal broke record after record as they reached the final against Barcelona. 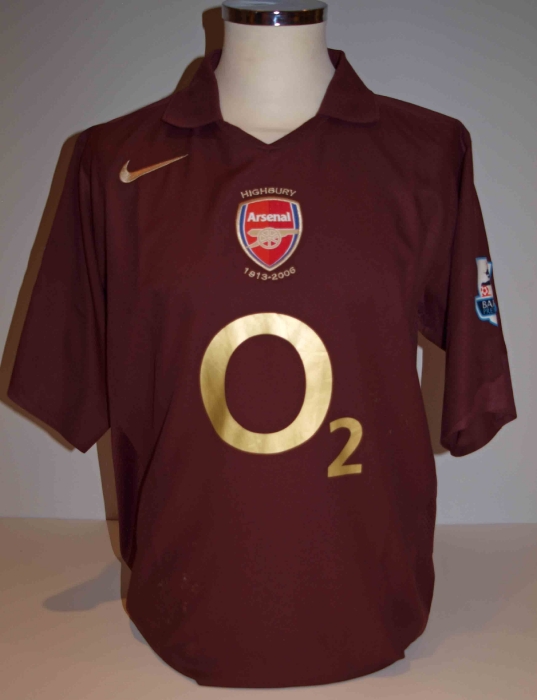 The ultimate season for any football fan. Unbeaten in the league, Arsenal should have done better in the Champions League, losing to Chelsea in the quarter-finals. Arsène Wenger recently said he regretted losing that match more than 2006.

At least he had the solace of the Premier League. Played 38, won 26, drew 12, lost 0. Not since Preston won the old First Division with just twelve teams in it during the 1888-89 season had any club gone unbeaten.

And it will be a while before it happens again. 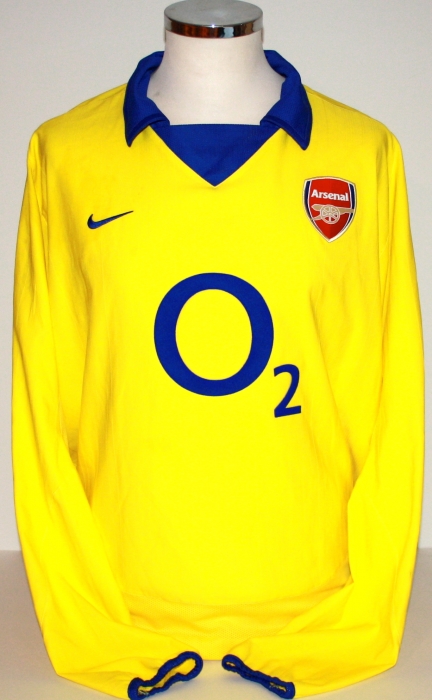 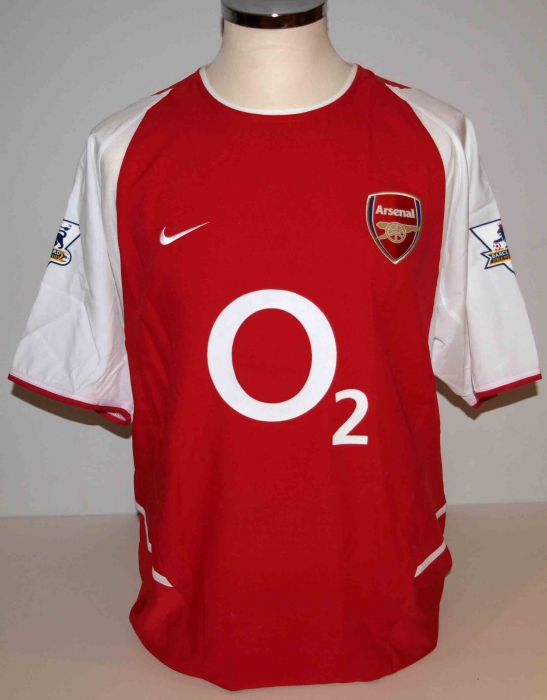 May 1971. Ten years earlier, Tottenham had won the coveted league and cup double. Now Arsenal faced two games to equal that feat. On Monday 3rd May 1971, in front of a sell-out crowd at White Hart Lane, Ray Kennedy scored the only goal of the game. Arsenal had won the title on the ground of their fiercest rivals.

They moved on to Wembley were they once again faced Liverpool. The two sides couldn’t be separated during ninety minutes and in extra time, Liverpool suffered. Wearing heavy cotton shirts, their energy drained as Eddie Kelly equalised after Steve Heighway had given them the lead. Cometh the hour, cometh the man. Charlie George unleashed an unstoppable twenty-yard drive and slumped to the Wembley turf for one of football’s iconic moments.

A few minutes later, Arsenal had won the cup and sealed the double. She wore a yellow ribbon indeed. 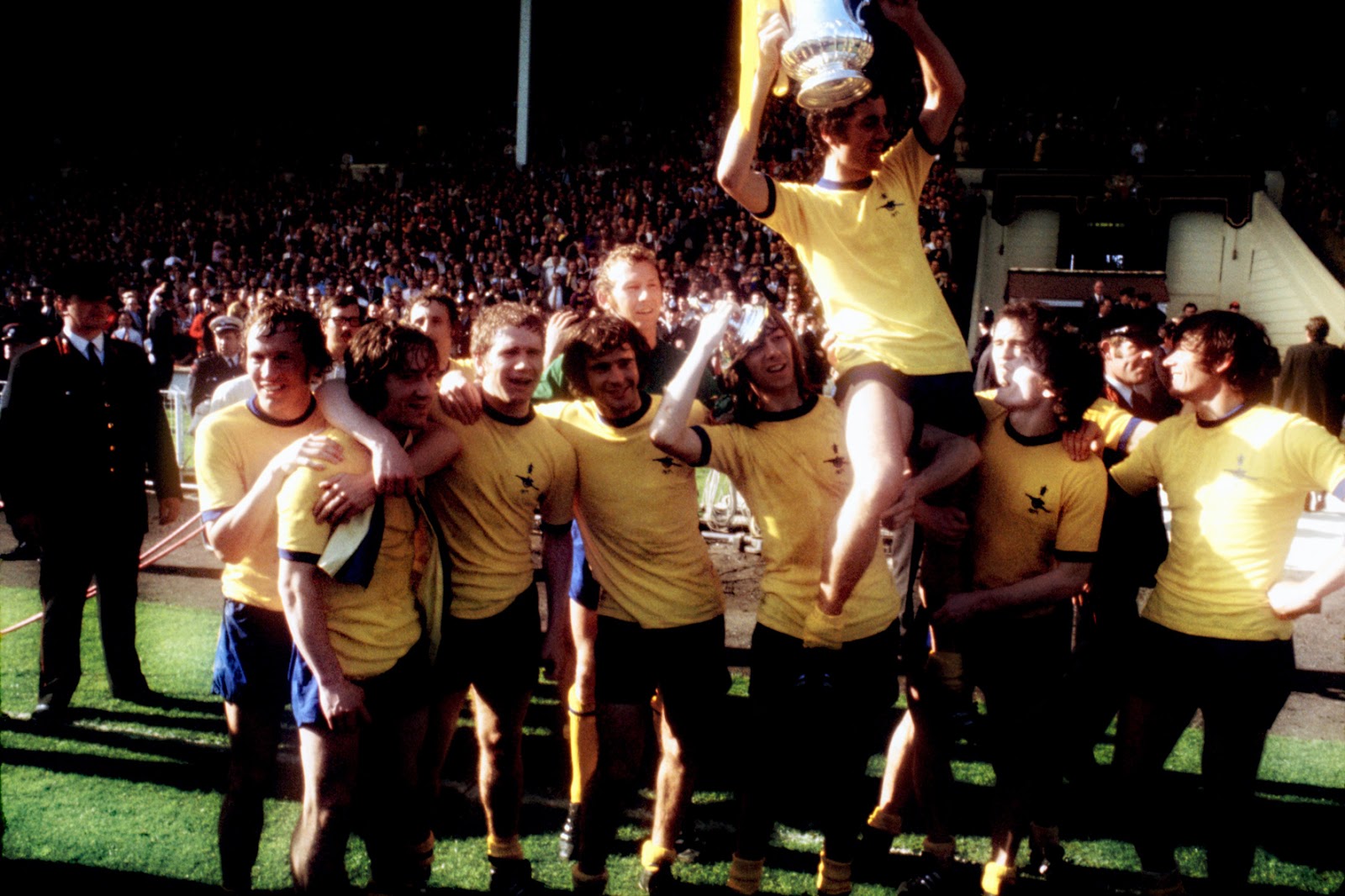 It remains the greatest night in English club football. Top of the table versus second. The usurpers travelling to the home of the most successful club in the English game. Fortress Anfield. No-one gave Arsenal a chance; Liverpool hadn’t lost by two goals at home in two years and Arsenal had to win by that margin to take the title.

After a goalless first half, Alan Smith scored with a glancing header. Liverpool protested but the goal stood. As the game wore on, Liverpool stood firm. Mickey Thomas fluffed his lines and it seemed Arsenal’s chance had gone. Steve McMahon signalled “one minute” remained and Arsenal sprang forward in attack. Brian Moore told the nation that “it’s up for grabs now” as Thomas surged through the Liverpool defence before coolly flicking the ball past Bruce Grobbelaar. Improbably. Impossibly. Arsenal were the champions. 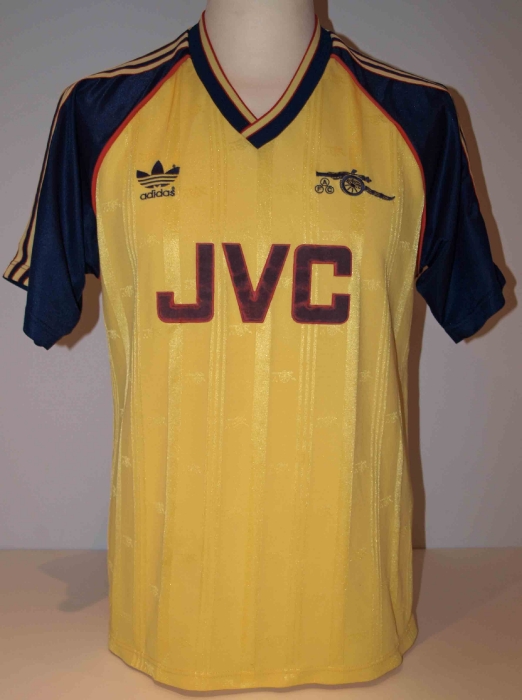 It’s a simple concept. Red body, white sleeves. Trim of white collar and red cuffs, with white shorts and red socks. It’s amazing how many kit designers get it wrong. This, from 1978, is how an Arsenal shirt should look. Remember that Puma… 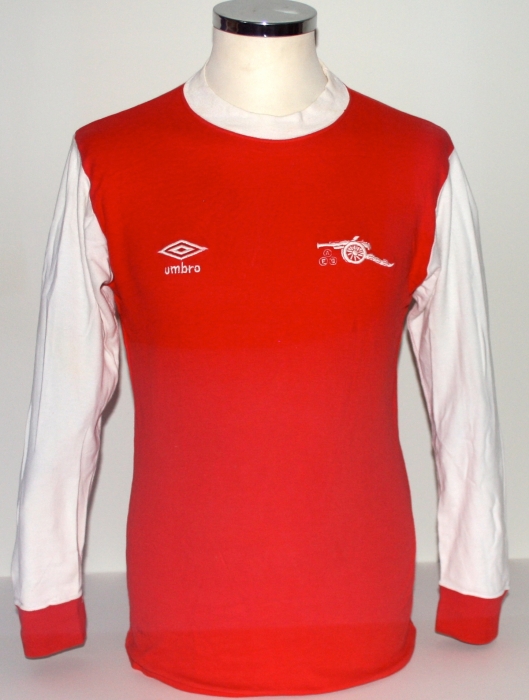