Trinidad and Tobago has new kits for the 2015 Concacaf Gold Cup, designed by Joma. The caribbean team debuted the home shirt in a friendly match against Panama last March, and the away kit will be ready for use during the continental championship which will take place next July. 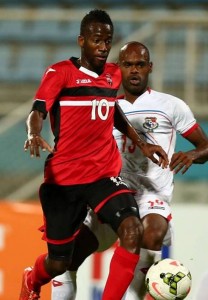 The jersey used in the game lost 0-1 versus Panama, has a red base with stripes at the upper chest featuring the other colors of the Trinidad and Tobago flag, black and white. The black one is the first one, which is wider, followed by a thin red one and a white stripe equally thin. The v-collar also is formed by the three colors, while the sleeves cuffs are black with a little white stripe. The jersey completes with the sides of the shirt colored black. 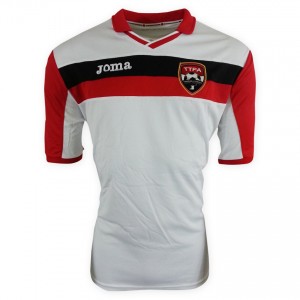 The away kit, still unused, has a white base and stripes in the upper chest but with a different design: red and black of the same width, with no lines in between. The v-collar is coloured red, as the sleeves and the cuffs. Cuba being one of the rivals in the Cup group, whose home jersey is also red, the Trinidad and Tobago away kit it is likely to be used for the first time in that match.