Arsenal v Tottenham, the north London derby. The first of the 2016/17 takes place at the Emirates Stadium this weekend. Arsenal hope Santi Cazorla will be fit to return to first team action – so do Puma!

The boot company unveiled the ‘Derby Fever’ of the evoTOUCH silo. Since both clubs are in the Premier League title fight this season, Saturday’s match assumes greater importance than usual – if that’s at all possible!

These are the Puma evoTOUCH Derby Fever boots: 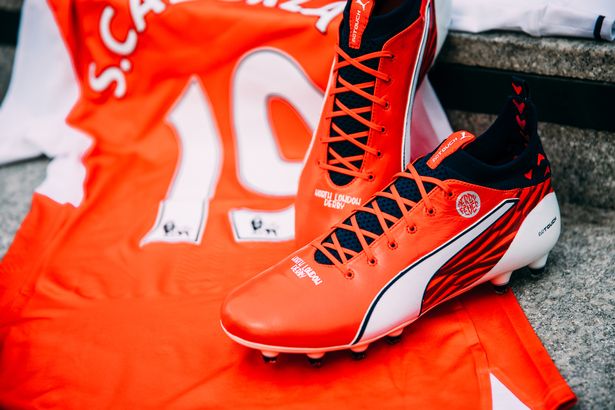 Puma used the Arsenal home kit as the colourway for the boots. The predominantly red features a white Formstripe. Between the plain red upper and the external heel counterbalance is a tigerskin graphic print in red and navy.

Below the laces on the upper sits a white ‘North London Derby’ motif. A white ‘Derby Fever’ logo features below the high collar on the outside of the boots.

Aside from the colourway, these Derby Fever boots are a standard evoTOUCH design. The premium Kangaroo leather upper is ultra-thin for unrivalled ball control. In addition, the evoKNIT sock gives a natural barefoot feel and unparalleled comfort.

They are a stylish ‘premium’ edition of the popular boot. Exclusive to Santi Cazorla in the professional game, the boots go on sale to the general public shortly.