Just two weeks after pictures of their home shirt leaked, West Ham United have seen photographs of their 2016/17 away shirt surface on the internet. As the club enters a new era with the move to London’s Olympic Stadium, both the home and away shirts hark back to days gone by.

This is the leaked West Ham United away shirt for the 2016/17 away shirt. 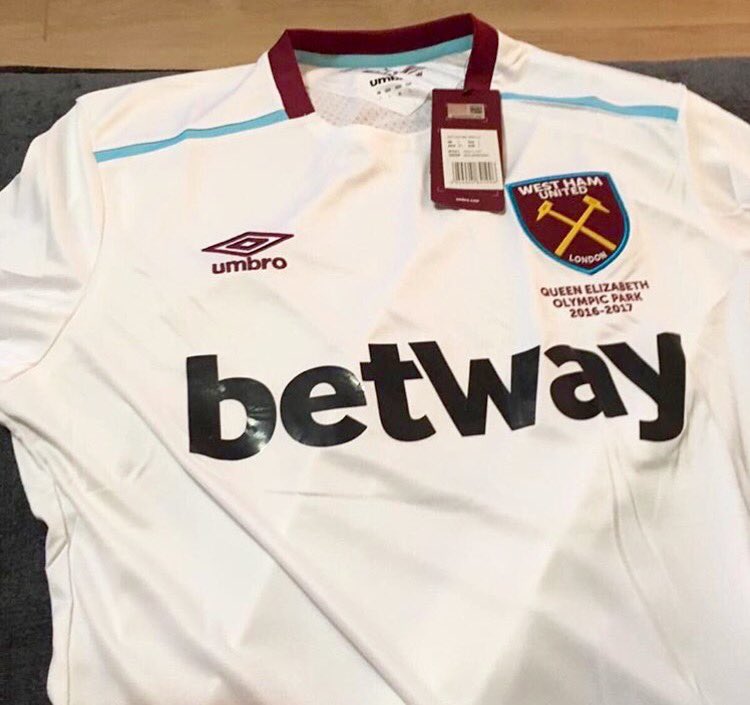 The umbro shirt is predominantly white with minimal interference from other colours beyond the trim.

The collar is claret around the sides and back of the neck, leading into a white v-shape at the front. At the point where the claret ends on the collar, sky blue lines emerge across the shoulder to the edge of the sleeve.

If the home shirt design is followed, the cuffs will contain a Union Jack pattern in celebration of the club’s ground move.

New shirt sponsors, Betway, have their logo across the chest with Umbro and West Ham’s new badge on opposite breasts.

It’s expected that the shorts will be sky blue and socks, white.

There’s been a mixed response to the design. Some appear to be pleased with the retro colour scheme but others find the lack of pattern and colour, “bland and uninspiring“.

What do you think – have West Ham come up with a late winner in the Premier League fashion stakes or is it a hammer blow to their credibility? Let us know in the comments.