Right now, rain is drizzling down this author’s window and Paul Lambert’s first press conference as Ipswich Town manager is playing in the background. Furthermore, AFC Bournemouth are sat in sixth place of the Premier League. That’s incredible. The club’s next match is against Norwich City in the Football League Cup. However, Eddie Howe will surely be focusing on the next league match against Manchester United. Furthermore, there are whisperings around Dean Court, the smallest stadium in the Premier League, that Bournemouth could take a top six finish. However, there are those that don’t believe The Cherries have enough steam to compete for the full eight months ahead. To take fans’ collective minds off this season, it might help them to look towards 2019/20. To assist them with their forward thinking, we’ve hunted around in the concept kit box and found a third kit that they might like.

AFC Bournemouth’s third concept kit is charcoal. It has a number of light grey lines running diagonally and this is the perfect blank canvas for the club’s crest, main sponsor and Umbro’s logo. 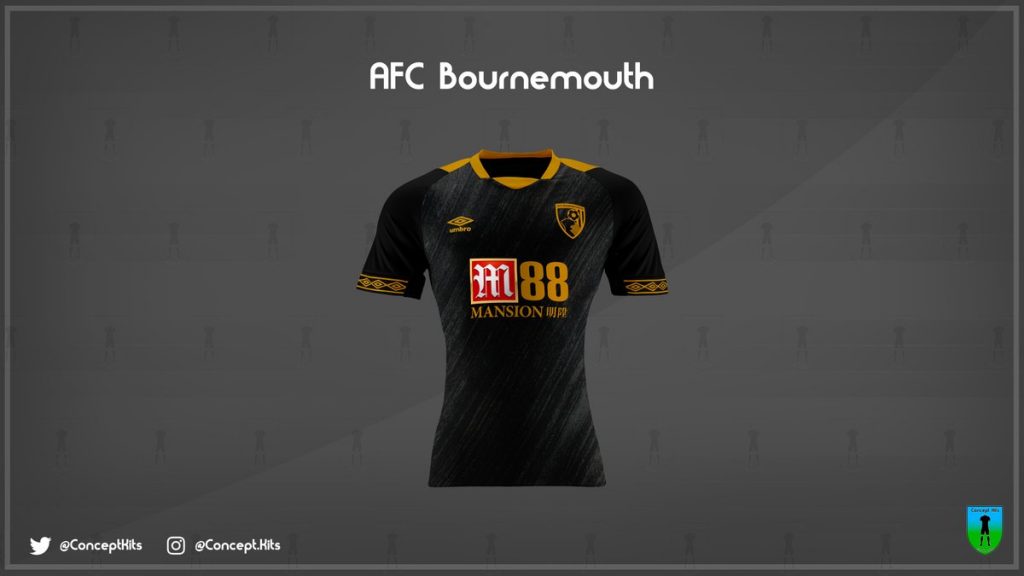 Each sleeve is solid black. Furthermore, bordering the bottoms, in Umbro’s trademark pattern is bright orange. Orange is also used for the club’s crest and Umbro’s logo. Surrounding the simple neckline is more of this gloriously contrasted orange. The colour runs across the shoulders and in front of the player’s neck.

The club’s current third kit is sky blue. However, it does appear a little bit empty. Furthermore, we brought you AFC Bournemouth’s 2018/19 home kit. The home kit is always a consistent design.

While concept kits rarely materialise as anything more than wishful thinking, we at UK Soccer Shop think this 2019/20 third kit would be an excellent addition to any realistic accompanying jerseys.